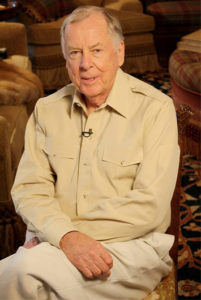 DALLAS, Texas – September 11 – T. Boone Pickens, legendary energy executive and one of America’s best-known entrepreneurs, passed away September 11, 2019, at the age of 91.

The long-time Dallas resident, who had battled back from a series of strokes and further head injuries sustained in a 2017 fall, died of natural causes surrounded by friends and family, according to spokesman Jay Rosser.

Pickens, who was born in Holdenville, a small town in eastern Oklahoma, spent his adult years in Texas.

He is survived by his five children — Deborah Pickens Stovall, Pam Pickens Grace, Michael Pickens, Tom Pickens and Liz Pickens Cordia— and 11 grandchildren and an increasing number of great-grandchildren.

Pickens was a pioneer in the energy industry, a career-long champion for shareholder rights, a groundbreaking health and fitness advocate, and a generous philanthropist whose charitable donations exceeded $1 billion. In July 2008, he launched a self-funded, $100 million, grass-roots campaign aimed at reducing this country’s crippling dependence on OPEC oil.  For more information on Pickens’ life, visit www.boonepickens.com.

“With an outsize personality and aggressive business tactics that landed him on the cover of Time magazine, Mr. Pickens became one of the few businessmen in the 1980s recognizable to wide segments of America. His influence is still widely felt. Mr. Pickens was an early advocate for shareholder rights and insisting that executives be compensated with stock. That line of thinking informed a new generation of shareholder activists, and remains gospel on Wall Street.”
— New York Times, January 20, 2018