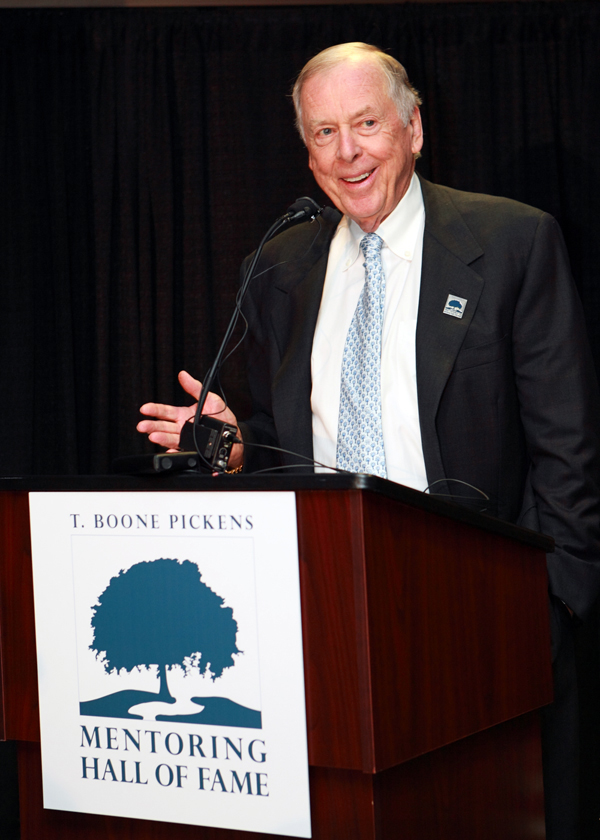 Whether the matter at hand was making a deal, kicking around ideas with his staff, or charming an interviewer, T. Boone Pickens didn’t pull punches. Some of his wisdom came in simple, effective reflection. Other insights reliedy on his well-known colorful, and most often humorous, turn of phrase.

Some time back, members of his family and staff, who refer to these insightful romps as “Booneisms,” began jotting them down. Most are graphic, straight to the bone, and delivered with an endearing flair. Some are appreciated more fully after a few moments of contemplation. The following are but a few of them.

“A plan without action is not a plan. It’s a speech.“

“Chief executives who themselves own few shares of their companies have no more feeling for the shareholders than they do for baboons in Africa.“

“In a deal between friends, there’s no place for a wolverine.“

“I once told a friend, “This is the kind of market that builds character.” He looked at me and said, “If it gets any worse, you’ll have more character than Abe Lincoln.”

“When you blow away the foam, you get down to the real stuff.“

“When you are young, fitness is a sport. As you grow older, it’s a necessity.“

“If you are going to run with the big dogs, you have to get out from under the porch.“

“Be willing to make decisions. That’s the most important quality in a good leader. Don’t fall victim to what I call the “ready-aim-aim-aim-aim” syndrome. You must be willing to fire.”

“Far too many executives have become more concerned with the “four P’s” — pay, perks, power and prestige — rather than making profits for shareholders.”

“Keep things informal. Talking is the natural way to do business. Writing is great for keeping records and putting down details, but talk generates ideas. Great things come from our luncheon meetings, which consist of a sandwich, a cup of soup, and a good idea or two. No martinis.”

“I have always believed that it’s important to show a new look periodically. Predictability can lead to failure.”

“If you’re on the right side of the issue, just keep driving until you hear glass breaking. Don’t quit.”

“The thing where you throw the ball and catch the ball — that’s a pretty neat trick. I’ve done it a few times, but it’s not something you can do consistently.”

“Fight your way out of corners. I play pretty good off the wall.”

“Everything here happens fast. There isn’t any standing around or looking at your watch. ”

“I learned early on that you play by the rules. It’s no fun if you cheat to win.”

“When you are hunting elephants, don’t get distracted chasing rabbits.”

“We’re flexible, quick on our feet and able to get the job done.”

“You win with a team, and I’m a good team builder.”

“Show me a good loser and I’ll show you a loser.”

“When you want to make a deal real bad you will make a really bad deal.” 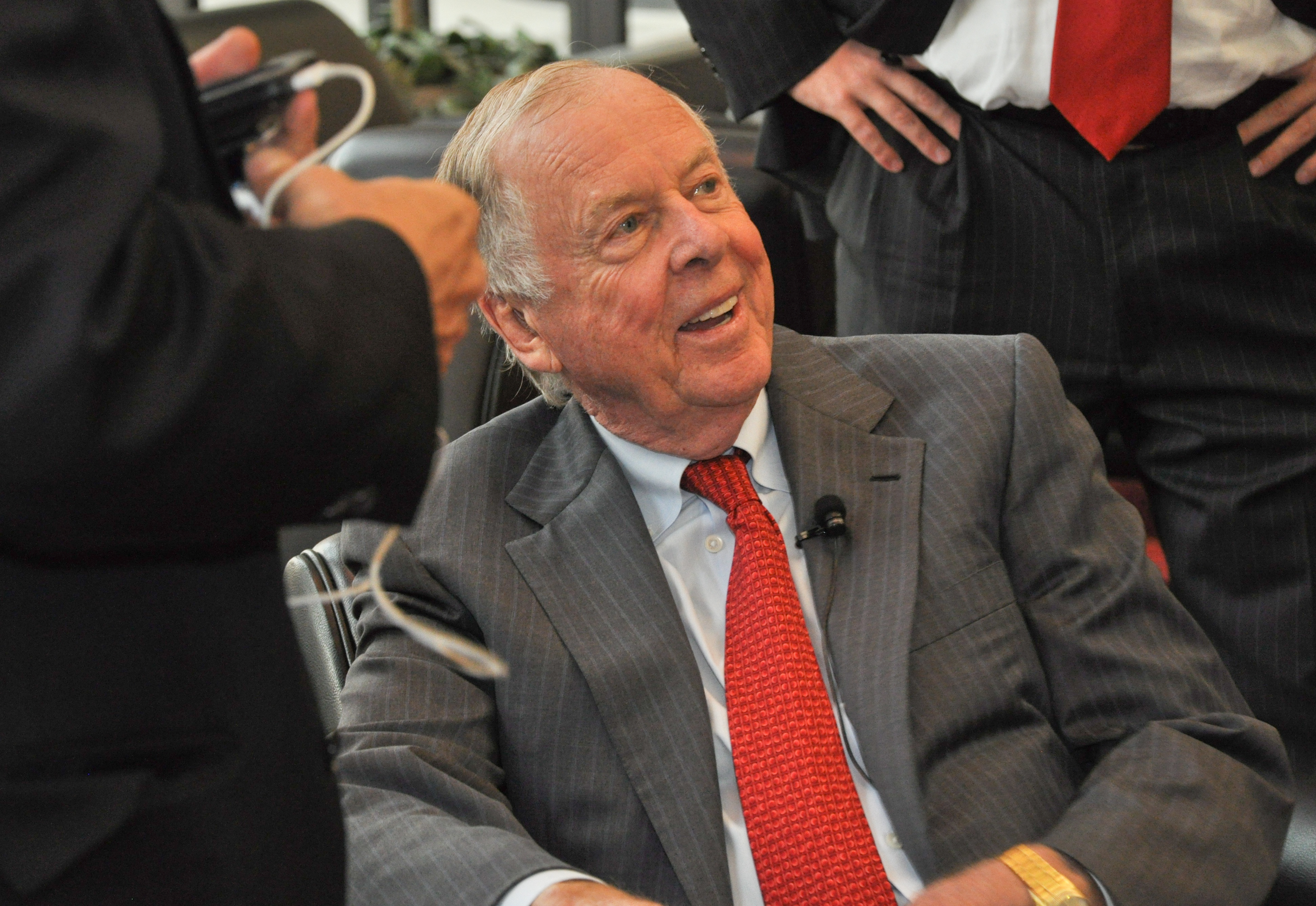 “He throws his money around like 200-pound blocks of cement.”
(He gets a bang for his buck.)

“He could screw up a one-car funeral.”
(Ditto.)

“He couldn’t find oil if he was standing ankle deep in it.”
(Ditto.)

“He couldn’t hit the ground with his hat.”
(Talking about a poor quail shot.)

“He rode up in front of the grandstand and fell off his horse.”
(Poor fella made a fool of himself in public.)

“He’s gone to the tall grass.”
(Someone is in hiding.)

“Tough as the back end of a shooting gallery.”
(Really tough, and we may like him, too.)

“I can’t hit it up my pant’s leg.”
(I should be doing something other than playing golf today.)

“You could be in paradise with a ham on your shoulder and you’d have something to complain about.”
(Let’s focus on the task at hand.)

“Your face is so long it would take two barbers to shave you.”
(Pickens’ father used to say this whenever his son appeared sad or upset.)

“He kissed his ass until his hat popped off.”
(Not good if Boone is talking about you.) 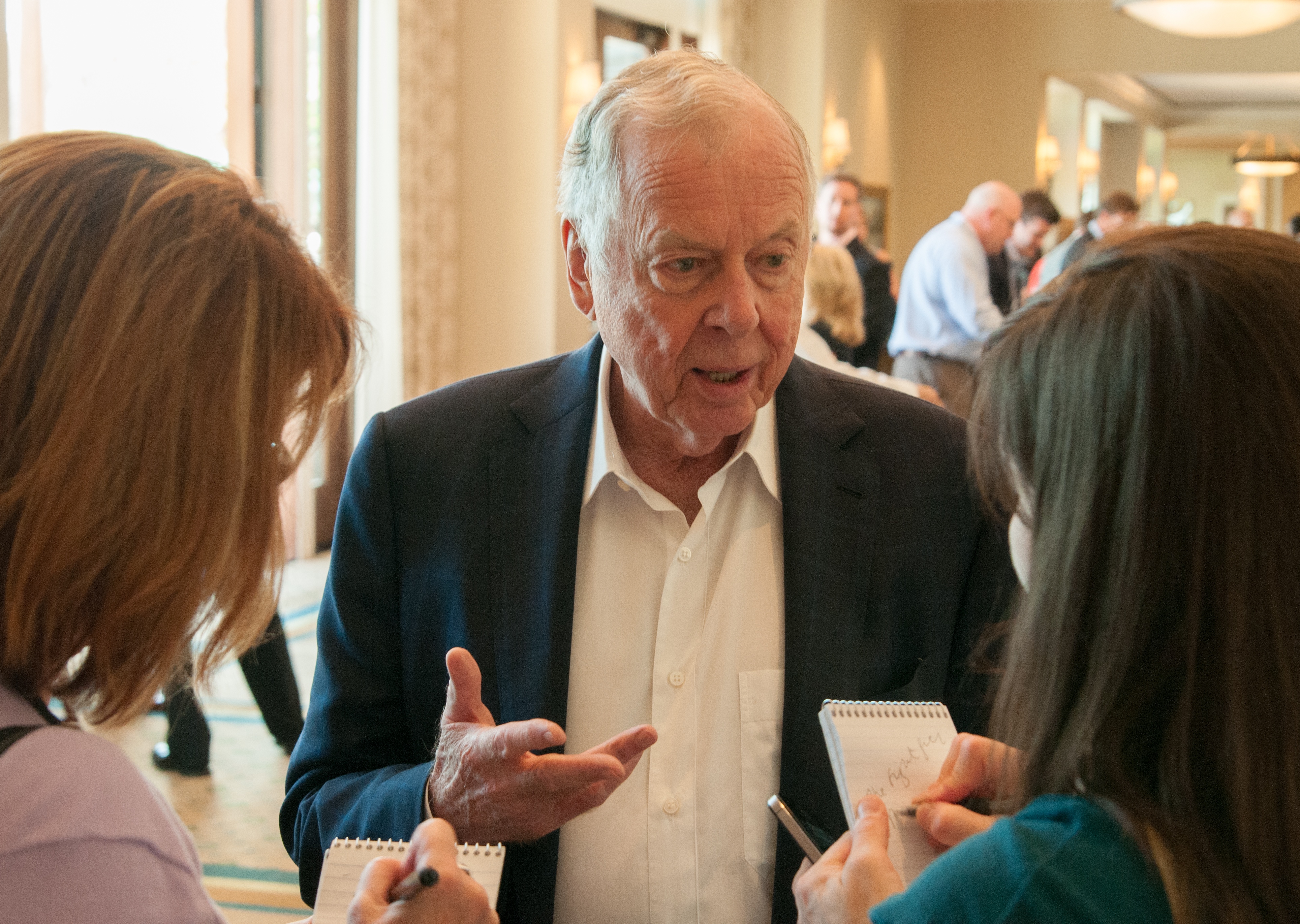 “I may have been born at night, but not last night.”
(I’m not fooled that easily.)

“You don’t even know who the enemy is.”
(You haven’t completely analyzed the situation.)

“It’s going to be hard to get that dog on the porch.”
(That’s one tough deal to pin down.)

“If he tells ya a goose can pull a wagon, I’d say load the wagon.”
(Expressing confidence in someone.)

“It’s like washing your feet with your socks on.”
(You’re really not doing anybody any good.)

“Dead right and dead if you’re off by 30 days.”
(Life in the Commodity Market.)

“Flatter than a bookkeeper’s ass.”
(The market is dead today.)

“It may smell like manure to you, but it smells like money to me.”
(Don’t be so quick to judge.)

“Scattered like Oklahoma bank robbers.”
(A covey of quail.)

“The higher the monkey climbs a tree, the more you can see his ass.”
(Don’t rush the monkey and you’ll see a better show.)

“There are three reasons we can’t do it. First, we don’t have the money, and the other two reasons don’t make a damn.”
(The response TBP would often get as a boy when he asked his dad, “Why can’t we do it?”)

“We’re catchin’ ‘em faster than we can string ‘em.”
(A great day in the market.)

“Anybody made money today … Anybody got an idea for how we can make any money … Am I the only one trying to make money around here?”
(Can you spot the Boone theme in there?)

“I rode it to the bottom of the canyon.”
(Stayed with a bad stock.)

“It will bust your eardrums on the way down.”
(Really bad deal … better hold on to your hat.)

“A fool with a plan can outsmart a genius with no plan.”
(Always have a plan.)

“The old man makes a comeback.”
(Something Boone always promised, and he lives up to every promise he makes.)

“Hell, it could have been my money.”
(Punch line to one of Boone’s favorite banker stories.)

“You can judge a trapper by his pelts or a wood chopper by his chips.”
(Getting results.)

“I don’t want to get old and feel bad.”
(Without being boastful, Boone acknowledging that he can lift more weight and run farther on the treadmill than an associate.)

“That’s like asking the postman to go walking.”
(Next question.)

“Carried the message to Garcia.”
(Send a message to the enemy or referring to someone no longer in favor.)

“The blood, guts, and feathers of it.”
(That’s the whole story.)

“You are pissing in my ear and telling me it’s raining outside.”
(How gullible do you think I am?)

“Broke every dish in the kitchen.”
(Run out of options.)

“Killed every cat in the alley.”
(Run out of options.)