Tomorrow night I will be taking my seat in my suite at a football stadium named in my honor. That’s hard to beat. In getting there, I will step off an elevator and begin a 50-yard walk to my suite and bypass the press box where, for the second year in a row, I will forgo the annual opening game press availability that, for 10 straight years, I enjoyed so much.

Last year, I was working hard to recover from a series of strokes and a Texas-sized fall. Communicating clearly and even walking from place to place was difficult. So, instead of the media availability, I formulated a statement outlining my thoughts on all things #okstate football. I’ll do that again this year.

First, know this. Despite my health setbacks, I made all but one home game last year, and fully intend to make them all this year.

I forged a friendship with President Ronald Reagan. I’m old enough to remember when he was an actor and played a key role in the 1940 film “Knute Rockne: All American,” a film about legendary Notre Dame coach Knute Rockne. In that film, Reagan played a star Notre Dame player, George Gipp, who, on his death bed, said this to Rockne: “Rock, sometime when the team is up against it and the breaks are beating the boys, tell them to go out there with all they’ve got and win just one for the Gipper.”

That’s where I am with Coach Gundy. “Mike, go out there with all you’ve got and win just one for the Boonester.”

Mike and I healed a lot of wounds last year. And I formed an unlikely friendship with Mason Rudolph. Aside from his parents, I truly believe I’m his number one fan. He and James Washington will be fun to watch in Pittsburgh over the years. I’ve enjoyed developing personal relationships with a number of great Oklahoma State players over the years, including Brandon Weeden, Vernand Morency, Russell Okung, Thurman Thomas and Barry Sanders, to name a few.

Don’t for a minute think my health has caused me get my dauber down. The state of Oklahoma State athletics is good, and getting better. Years ago, Mike Holder and I dreamed of creating an “Athletic Village.” Today, it is driving ever closer to reality. New tennis facilities. New soccer stadium. New baseball stadium underway. And in each instance, the respective programs have become exponentially better. I’ll put it on the table here and now. When the timing is right, I think serious consideration should be given to naming the village in honor of the one who made it happen. “The Mike Holder Athletic Village.” He deserves it. Mike has dedicated his life to this school. Mike is like a son to me, and is one of the humblest people I know. He’d fight the naming honor to the end.

I’m honored that the university has commissioned a sculpture of me to stand at the entrance to the West End Zone at Boone Pickens Stadium. I’m hopeful it can be in place for next year’s football season. Hopefully, not long after that, I’ll be joined by Barry Sanders, who is so deserving of his own sculpture.

As I write this, my boyhood home is being moved to Oklahoma State, at Karsten Creek. I’ve also decided that’s where – hopefully in a decade or so – I will be buried. “The Holdenville House” is a great depiction of life in southeastern Oklahoma during the depression. I cherished my years growing up in Holdenville, “Where the pavement ends, the west begins, and the Rock Island crosses the Frisco.”

The quest for a national championship begins anew tomorrow night, and I couldn’t be more excited. 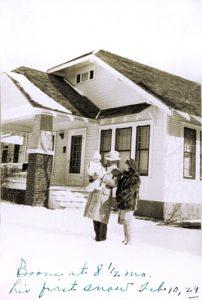 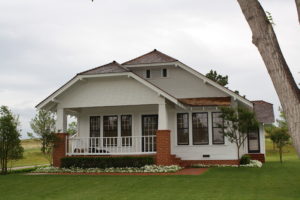